Plant a tree in memory of Maurice
An environmentally-friendly option 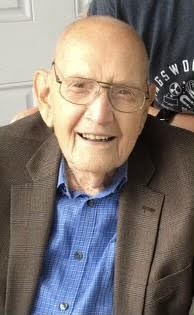 Maurice attended Benton High School.  He would then proudly serve his country in the United States Navy during World War II.  Maurice married the love of his life, the former Dorothy Ann Yohey, on December 19, 1942.  Together they would raise their children and share 59 years of marriage.  Maurice worked at Wise Foods in Berwick for 46 years, until his retirement in 1986.    He was an active member of Bethany United Methodist Church, where he served on the Pastor Parish Relations Board, was a member of the Vigil Bible Class of the Sunday school, and was involved in numerous other boards and committees within the church.  He was a member of the Berwick VFW Post 821, drove for the Berwick Volunteer Ambulance for 26 years, and served on the Red Cross Board.  Maurice was active in the Berwick Senior Citizens Club, having served as its president in 1993 and as co-chairman of the organization’s Trip Committee.  He had been instrumental in moving the organization into its current location on Orange Street.  Maurice will be fondly remembered as a kind and caring person who generously gave of his time, energy, and talents and will be greatly missed by all who had the good fortune to have known him.

Maurice’s services are private with his interment at Rose Lawn Cemetery, Berwick.  His pastor, Rev. Stephen Portner will officiate.  Memorial contributions in his name can be made to Bethany United Methodist Church stained glass window fund, 116 Summerhill Avenue, Berwick, PA 18603.  The Kelchner, McMichael & Readler Funeral Home, Inc. is honored to serve Maurice’s family.  Online messages of comfort and support can be left at www.kelchnerfuneralhome.com.

Plant a tree in memory of Maurice by clicking here.
To send flowers to Maurice's family, please visit our floral store.

A service summary is not available

Plant a tree in memory of Maurice
An environmentally-friendly option

Plant a tree in memory of Maurice

1 tree planted in memory of Maurice

I met Mr. Ford while attending Bethany UMC.  I will always remember his smile. I also loved listening to his stories while having coffee and hanging out at McDonald's.  My deepest sympathy to his family and friends.

To the Ford family:

My sincere condolences.  Maurice had a pleasant smile and always ready to talk.   He was very helpful with the Senior Citizens organization, too.   Nice family.  He will be missed by all.

So very sorry for your loss.   I will miss seeing him around.  You are all in my thoughts and prayers.

Plant a tree in memory of Maurice